The Pines Lake Elementary School in Wayne held its seventh annual Turkey Trot on the Wednesday before Thanksgiving, with the purpose, once again, to donate food to those less fortunate, who reside in the Pines Lake section of Wayne, as well as raising money during the holiday season.

This year’s Trot was especially heartfelt, as one of the school’s former students, Lou Brandt, recently passed away this Oct. 22, after a battle with cancer. Brandt was just 45 years old. He had played football at Wayne Hills and later at the University of Massachusetts.

Students at the Pines Lake School in Wayne celebrate a successful Turkey Trot. (Click on photo for larger image)

“At the time, one of our custodians had died suddenly, and we wanted to do something to honor him,” recalled Scalzitti. “That first year, we donated money to St. Jude, because our custodian loved that charity. Since then, we’ve tried to remember different people associated with the school, as well as donating food to families who could use it around the Thanksgiving holiday.

“This year, with Lou’s passing, and he was once a student here, it seemed only appropriate to honor him.”

Brandt was a loyal follower of Wayne Hills football, long after he played for the Patriots and was a regular at the team’s annual father-son beefsteak, held on the Wednesday before Thanksgiving.

Several members of this year’s state sectional champion Wayne Hills football team participated in the Turkey Trot. The team also donated turkeys to the school, to go along with the food collected. The children, teachers and football players walked and ran around a path outside the school.

“It was really something special today,” said Scalzitti. “(Wayne Hills head coach) Wayne (Demikoff) and the players couldn’t have been nicer. They brought turkeys and interacted so well with the kids during the Turkey Trot. Little kids really look up to high school athletes, and the Hills players were incredible. We were all so proud of them in winning a (state sectional) championship last week, and we all wished them luck when they go play at MetLife Stadium (on Nov. 30). Coach Demikoff and those players are always supporting a cause and trying to help others.”

Demikoff found the experience especially fruitful with the holiday approaching.

“It’s very important that our players understand all the great things they have in life, and that there people struggling, in our own backyard,” said Demikoff. “Winning championships is what we strive for as a program, but that would mean nothing if our kids weren’t giving back to their community and representing themselves in a class manner. A championship character is what will help make these young men successful as fathers and husbands later on.

“It meant a great deal to be here today and I can’t thank Pines Lake School enough for donating money to a fund set up for Lou Brandt. Lou was a special guy.”

In addition to collecting food, the children raised nearly $400 toward the Lou Brand fund.

The fourth annual George Zanfini Memorial Scholarship Fund Dinner will be held Thanksgiving Eve, Nov. 21, at the Chandelier in Belleville, starting at 6:30 p.m.

Phil Agosta, a Belleville High graduate, has worked hard to keep the dinner’s theme alive and thriving, with the focus always on the fabled Belleville-Nutley football rivalry. The dinner has had many formats, and has always been held on Thanksgiving Eve. The Fiorente Club hosted it for many years. When the Belleville-Nutley game was played on Columbus Day weekend, the dinner looked back on that year’s game.

Former Belleville High football coach John Senesky (right) was a guest speaker at a recent dinner. He was also a regular back when he was the team’s head coach. Senesky is joined in photo by Phil Agosta. (Click on photo for larger image)

In 1984, the football rivalry was moved to Thanksgiving Day, so the dinner on the night before had extra significance, as former Belleville and Nutley players would reminisce, and the current coaches would speak on the game’s importance. 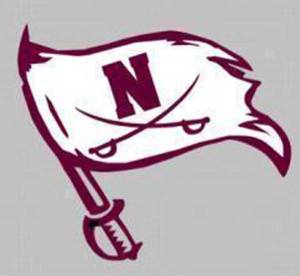 The rivalry was moved back to Opening Day, in 2012 and discontinued after the 2015 game. However, the dinner has continued to thrive and this year, with the teams meeting on the gridiron on Nov. 3, there should be some extra energy, as Nutley won an exciting game, 20-13. 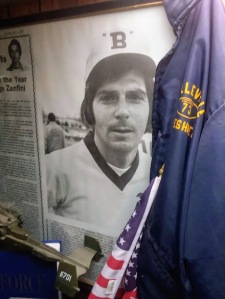 George Zanfini was a special man in Belleville and is missed today.  (Click on photo for larger image)

Zanfini was always a popular figure at the dinner, and never missed the event. Sadly in August 2015, the Township of Belleville was stunned by the passing of Zanfini, himself a coaching legend and a Belleville High graduate.

The varsity baseball field had been named after Zanfini since 2008. Zanfini was also a tremendous football coach. He and John Senesky had some tremendous freshman teams at Belleville for six years.

A collage of photos during Zanfini’s days as head baseball coach at BHS. (Click on photo for larger image)

After Zanfini’s passing, at the age of 72, the dinner was renamed in his memory.

“We started a scholarship fund in George’s name, which benefits students from Nutley and Belleville High,” said Agosta. “Mr. Zanfini was a teacher and coach at Belleville for 40 years. He always loved this dinner and was a regular on the Wednesday before Thanksgiving.

When George retired as a teacher in 2007, I wrote a long feature on his career. When he died in 2015, his family presented me with that article, which George had framed and kept in his Belleville home. (Click on photo for larger image)

“We’re hoping for another good turnout. The George Zanfini Scholarship is something we’re all very proud of.”

Tickets for the event are $50 per person, which includes a full buffet dinner, with beer, wine, soda and dessert. Tickets can be purchased on the night of the event.