Caldwell softball coach Mike Teshkoyan has been at the helm, along with his brother, Mark, for over three decades. Along the way, Caldwell has won eight county championships under their tenure, as well as success in the NJSIAA Tournament, not to mention numerous conference championships.

With the 2019 season underway, the Chiefs have moved up to the Super Essex Conference’s American Division, and with it, a tougher schedule.

Caldwell picked up a big win on April 12, defeating arch rival West Essex, 6-1, in Caldwell. While the schools are located just 3.6 miles from each other, it was the first meeting between the two teams in three years and Caldwell’s first victory over West Essex since the quarterfinal round of the 2014 Essex County Tournament.

“We’ve been in different divisions, and even with crossovers, we didn’t see West Essex for a few years,” said Teshkoyan. “This year, we’ll play them twice. They’re a good team, and this was an important game for us.”

Caldwell (5-2) was paced by junior shortstop Nicolette Luzzi, who homered in the first inning and  later tripled. Luzzi also drew a pair of walks and scored three runs.

“She’s our catalyst,” said Teshkoyan of Luzzi. “She gets things going.”

West Essex (3-3) took an early 1-0 lead in the top of the first, but the Knights had trouble containing Luzzi’s play-making skills and Caldwell came through with some clutch hits, including a key RBI double by Caitlin Cetrulo, a freshman first baseman, to ignite a 3-run rally which extended Caldwell’s lead to 5-1.

Nicolette Luzzi (right) had 2 hits and made a big play on defense while Caitlin Cetrulo keyed a big rally for Caldwell in a win over West Essex. (Click on photo for larger image)

“We didn’t take good swings at the plate,” said West Essex coach Andrea Mondadori-Llauget. “We could have been in better position by being smarter at the plate. We’re young, and we have to learn from games like this.”

Caldwell pitcher Bridget Nichols tossed a complete game and scattered five hits, as the Chiefs won for the third time in its last four games.

Ryleigh White of Immaculate Heart Academy pitched her second no-hitter in as many days, as the Eagles downed Clifton, 7-0, in Clifton. A day earlier, White, a junior right hander, blanked DePaul, 10-0, in a 5-inning, no-no.

IHA (6-0) has been hitting the ball effectively, as well. Versus DePaul, Gianna Stirone and Cat Thomas had three hits each while Emily Gyongyosi, Cara Kochakian, Gabby Park and White had two hits each. Kochakian, Stirone and Mia Recenello also homered in the game. 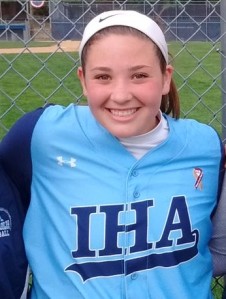 Cat Thomas of IHA had a big game against DePaul, with 3 hits. (Click on photo for larger image)

Versus Clifton, Kochakian, a freshman shortstop, was 3-for-3.

After a scoreless game for five innings, Cedar Grove pulled away for an 8-0 win over Columbia, in South Orange. Gianna Bocchino was 3-for-4, with two RBI and winning pitcher Mia Faieta pitched a no-hitter, with 15 strikeouts for the Panthers. Cedar Grove improved to 7-1 on the season. 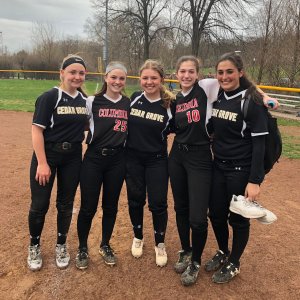 Friends and rivals: Columbia and Cedar Grove players gather for a picture after a well-played game. (Photo courtesy of Suzanne Hassler. Click on photo for larger image)

The Lions had 11 hits in the game. The Mount will host its annual tournament, on April 13, with an excellent schedule of games planned.

Verona snapped a 2-game losing streak with an 8-1 victory over Millburn. Megan Meehan had four hits and Kate Ryan was 3-for-3 with four RBI for the Hillbillies. Quinn Thomas and Taylor Nemet had three hits each for Millburn while Abigail Policarpio had two hits.