The Millers finished 19-9 and made a solid run in the NJSIAA Tournament, advancing to the North 2, Group 4 semifinals, before losing a 4-0 decision to North Hunterdon, which went on to win the Group 4 championship and earned an appearance in the Tournament of Champions.

And to top off the season, the Millers won a Super Essex Conference (SEC) Liberty Division championship.

“We had some big wins this year,” said Childs. “We defeated (SEC rivals) Caldwell and Columbia twice and got to the semifinals of the sectional. ” 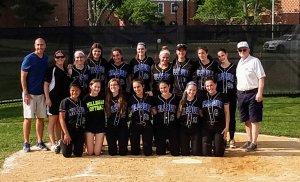 Millburn celebrated another SEC title after winning its season finale at Newark Academy, on June 1. (Click on photo for larger image)

It’s been a tremendous run for the senior class, as Millburn has put up some outstanding numbers.

“We have never really been known a softball power, but this senior class has achieved some outstanding accomplishments over the last four years,” said Childs.

Millburn won the SEC Liberty this year while taking home a pair of SEC Colonial Division crowns in 2015 and 2016.

“We won 77 games, averaging 19 wins a season (over 4 years),” said Childs. “That’s a big step for a program that hadn’t won more than 18 games in a season before the current group of upperclassmen started high school.”

Millburn also set a team record this spring, with a fourth straight winning season. Other highlights in 2018 included the team winning the Wallkill Valley Lady Ranger Tournament, for the second time.

Kaitlyn Miller, who had torn her ACL and meniscus in the second game of the 2017 season, won 18 games this spring, which broke the record for pitching wins in a season, which was 16.

Helen Casey and Katy Shepard became the fifth and sixth Millers to finish their careers with 100 hits. Both players were named first team All-SEC.

Casey will continue her career at Fairfield University, in Connecticut, and play on the NCAA D-1 level. She also played her final high school game at the NJ Pride Super 36 All-Star Game earlier this month.