A number of talented seniors helped the Panthers to perhaps the greatest run in the program’s history. It seemed like yesterday when a freshman pitcher named Kelly Toomey starred in the circle,  as the Panthers won its first Group 1 championship in 36 years.

Toomey had a tremendous season in 2018, both in the circle, the field and at the plate. Toomey, who is also a standout in the classroom, will attend the University of North Carolina in Wilmington this fall.

What more can you say about Ava Fernandez? Another marvelous player over four years, Ava, who will play at Springfield College stating this fall, was a stud at the plate, and in the field.

The Panthers were also led by seniors Ava Mandala, Micaela Kennedy and Kali McCabe. Mandala and McCabe will be attending Rowan University this fall while Kennedy will enroll at the University of Connecticut.

Cedar Grove finished 25-6 this year, winning a state sectional title for the second straight year and third time in the past four seasons.

There were so many good games this year in NJ high school softball. One of the best I saw came on April 22, at the Black and Gold Tournament, as Cedar Grove and Immaculate Heart Academy put on a show, with IHA winning, 2-0, in 10 innings.

Both Mia Faieta of Cedar Grove (AKA California Chrome) and IHA’s Ryleigh White were outstanding in the circle, putting up some ridiculous numbers. Faieta, a junior, would strike out eight of the first nine batters she faced and finished with 18 strikeouts in 9 1/3 innings of work, while giving up four hits (three of which came in the top of the 10th), walking six and hitting a batter.

White, dubbed ‘Citation‘, is a close friend of Faieta’s, since the two play on a club team together. She struck out her 20th batter in the bottom of the 10th inning to end the game. 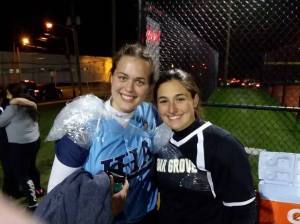 Mia Faieta (right) and Ryleigh White battled through 10 intense innings in the circle, but were all smiles afterward. (Click on photo for larger image)

Mount St. Dominic had a tremendous run in the state tournament, winning a North Non-Public A title for the first time since 2014, then playing a hard-fought game against St. John Vianney, before losing a 2-1 decision.

As mentioned earlier, Cedar Grove won another state sectional championship. Its bid for a third state title in four years was denied by Roselle Park in the Group 1 semifinal. Roselle Park went on to win a state title and played in the Tournament of Champions.

I got the chance to see Columbia play on a few occasions this spring and was really impressed with that team’s infield defense. The sophomore-dominated infield certainly gives head coach Cliff Smith a lot of optimism for the next two years.

Hudson Hassler, (aka Hud the Stud) a sophomore, turned in a stud-like performer for Columbia. (Click on photo for larger image) 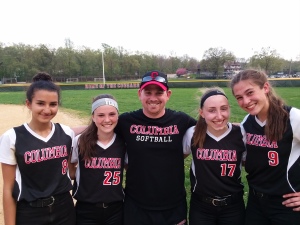 Columbia head coach Cliff Smith, flanked by (left to right) 3B Lucy Gagne, shortstop Hudson Hassler, 2B Alexa Stephan and 1B Paige Carlson. All four infielders were sophomores for Columbia. (Click on photo for larger image)

Columbia finished 16-9 this spring and the future certainly looks bright for the Cougars, led by Smith, an energetic coach who has done an excellent job in building the program.

Essex County softball also had good seasons from Caldwell and Livingston. See the links below for more information. Congrats to all the teams. Summer softball is starting on the week of June 25, so get your popcorn ready !