When Livingston began play in the 2018 NJSIAA Tournament, Columbia coach Cliff Smith saw that the Lancers were seeded 13th in North 1, Group  4.

“I’ll tell you what, I wouldn’t want to play them,” Smith said at the time. “No way. Not with that guy coaching  them.”

“That guy”, of course, is the Lancers’ head coach, Jason Daily. And to the surprise of almost no one who understands the game, Livingston finds itself playing for the North 1, Group 4 title, on May 29, at third seeded Mount Olive.

Livingston put itself in position for a fourth state sectional crown in the last six years when it defeated top-seeded Fair Lawn, 6-4, on May 25, in Fair Lawn. The Lancers improved to 13-13 on the season. Under Daily, it has won sectional crowns in 2012, 2013 and 2016.

The Big Green Machine (as I like to call them) got another tremendous performance from senior Jess Gorman, who is pitching similarly to the way Syd McCormack did in 2016, when Livingston last won the sectional title.

“Jess’ velocity has really picked up this year,” said Daily. “She’s an outstanding competitor. And Jess had to be pitching well, because Fair Lawn can really hit.”

Gorman’s batterymate, senior Emma Cooney, continues to be a hitting machine, as well as perhaps the best defensive catcher in Essex County.

The ‘Charismatic’ Cooney, here with good friend Lily James of West Essex, will play at William Paterson University this fall. (Click on photo for larger image)

“What else can you say about Emma?” said Daily. “She’s been our leader for a number of years.”

Another outstanding senior is shortstop Ashley Reuter, one of the team’s best all-around athletes. Ashley’s younger sister, Hailey Reuter, a freshman, has stepped in well at second base.

“Hailey made a tremendous catch for us against Fair Lawn,” said Daily. “The wind turned the ball around on her, and she still made a big catch at a crucial time.”

Briana Melucci had two big hits in the win over Fair Lawn.

The Livingston infield is solid, with Chloe Saperstein playing third, the Reuters are shortstop and second base and first baseman Sam Randis, who had a good day offensively against Fair Lawn. Saperstein could also be Livingston’s catcher in 2019.

Good defense and timely ‘small-ball’ has defined Daily’s teams since he began as head coach in 2001. Daily generally low keys any accolades directed toward him, deflecting the praise to his players, but a lot of coaches know better.

“I call it like I see it,” said former Montclair High coach and current William Paterson assistant Phil Delgado, in discussing Daily. “He’s one of the best around.” 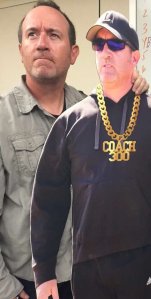 Daily is always intense, even with a cardboard cutout of himself. (Click on photo for larger image)

Nutley coach Luann Zullo has been competing against Daily for 18 years.

“Every time we play Livingston, it’s just a crazy game,” said Zullo. “No lead is safe against them. no situation is ever the same. Jason makes moves on the fly, and he’s such a good coach. His teams are always prepared. We’ve won some games against them in the past, but it’s always a battle.”

“It seems like Jason does this every year,” said Smith, a young coach who is doing good things at Columbia. “I hope to be as good as him one day.”