The Cougars coach had seen his team drop a 6-0 lead in a game at Millburn last week, only to watch Columbia rally with six runs in the seventh inning to win it.

Now, on April 17, Columbia had opened a 7-0 lead, at Nutley, in the fifth inning, before the Raiders stormed back to score five runs in the last of that frame. And again, resiliency had its say, as Claire Salinardo blasted a homer over the centerfield fence to lead off the top of the sixth, and the Cougars went on to a 10-5 Super Essex Conference cross over victory, which improved its record to 4-0 on the season.

“Yeah, I was thinking ‘here we go again’,” said Smith after the Nutley game. “You never count a team like Nutley out. They hit the ball, they’re so well coached and play hard. This was exactly what I wanted to see from our team today. Claire’s homer came at the right time. It’s a really big win for us.”

Columbia had come into the game ranked fifth in the FMTC Top 10, while Nutley was fourth. The seeding for the 41st Essex County Tournament should be announced some time next week, and Smith is hoping his team could get a higher seed. 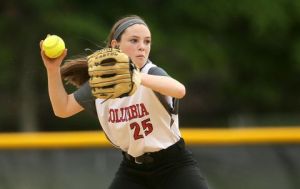 Hudson Hassler, a talented sophomore shortstop, has been a key to Columbia’s 4-0 start. (Photo courtesy of Cliff Smith. Click on photo for larger image)

“There’s a lot to do before that,” said Smith. “We have a game with Belleville (on April 18) then at Newark Academy (April 20), two tournament games over the weekend and Montclair next Monday, at home. But this was a good step.”

The resiliency factor was also evident in that Columbia scored four of its runs, in three different innings, after two were out and no one on base.

Columbia scored first, in the top of the third. With two outs, Sophie Goldman drew a clutch walk and scored on a double by Salinardo. In the Columbia fourth, again with two outs, Paige Carlson reached on an error and later scored on a single by Cara Harrington and a subsequent passed ball.

The Cougars appeared to put the game away in the top of the fifth, as Hudson Hassler, Columbia’s stellar leadoff batter and shortstop, doubled to lead off the frame. Hassler moved to third on a wild pitch and scored on a fielder’s choice by Goldman, who was safe at first. Salinardo drew a walk and winning pitcher Jordan Stephan singled in a run, to make it 4-0. Alexa Stephan followed with a hit to score a pair and Ally Krause hit a sacrifice fly to plate another run and give Columbia a 7-0 lead.

Nutley (2-4) rallied with five runs in the bottom of the fifth, on four hits, including a pair of doubles, and had the tying run at the plate, but Jordan Stephan struck out three in the frame and worked out of further damage.

Salinardo got one run back in the top of the sixth with her homer and Goldman hit a two-run single in the seventh, scoring Clementine Sherman and Hassler with insurance runs. Again, the two runs in the seventh came after two outs and none on base.

They are clearly the two best teams in Essex County so far in 2018, and the first of three possible games between Caldwell and Mount St. Dominic went to the Panthers, who rallied from 1-0 and 2-1 deficits to edge the Lions, 3-2, in nine innings, on April 17.

Mia Faieta pitched a complete game for Cedar Grove and also hit a solo homer to tie the game in the fifth inning. Kelly Toomey continued her outstanding play with a run-scoring double in the ninth which tied the game, 2-2, and led to Jules Cicala driving in the game-winning run later in the frame.

Fans won’t have to wait too long to see these teams play each other again. They’ll meet at Mount St. Dominic, on April 27.

In the meantime, both teams have big games coming up. Cedar Grove (7-2) has matchups with Newark Academy and Immaculate Heart Academy when its hosts the Black and Gold Tournament on April 21 while the Lions (4-4) play at Verona on April 18, then head to Ohio for the prestigious Wendy’s Invitational this weekend.

Bloomfield started slowly, losing its first four games, including three contests by a total of five runs, but the Bengals have come back strong, with two straight wins, in which it scored over 10 runs both times.

The Bengals downed long-time rival Belleville, 11-0, on April 17 and were to face a big test a day later, at Cedar Grove. 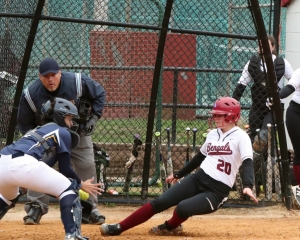 Katie Bretz was 3-for-3 with 5 RBI and 3 runs scored, while winning pitcher Lexi Corio, Jamell Quiles and Melissa Marte had two hits each for the Bengals. 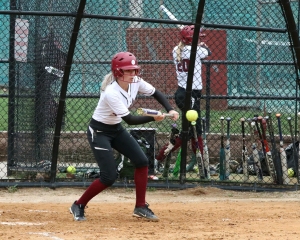 Lexi Corio squares for a bunt in a win over Belleville.