West Essex has enjoyed a level of success under head coach Andrea Mondadori Llauget over the last 13 seasons, including multiple state sectional championships, a pair of Essex County Tournament crowns, a few titles in the ultra competitive Super Essex Conference and over 230 victories.

While ‘Mondo’ is the head coach, she is quick to credit her long-time assistant, and good friend, Jason Ahmed, known as ‘Jay’ to his friends and West Essex players, past and present.

Jason Ahmed (back row center) has been a big part of West Essex’s success over the past 13 seasons. (Click on photo for larger image)

“Those guys don’t get nearly the credit, outside of their teams,” said Mondadori Llauget. “Jay and Mike are highly respected within their teams, for sure. The parents and kids know the hard work they do. And I’m not just mentioning them. There are some tremendous softball programs in the SEC, with some outstanding head coaches, and most will say they all have had success because of a great coaching staff.” 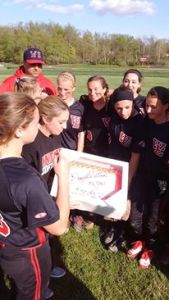 When Coach Mondadori won her 200th career game in 2016 (Jay is in the background) she called all the wins “Jay’s and mine”.

For Mondadori Llauget, the camaraderie with Ahmed goes back two decades.

“Jay and I both went to Rutherford High School,” said Mondo. “He graduated in 1999, me, two years earlier. He played baseball and I played softball. Our fields were opposite each other. We had a mutual friend, Mike Anderson, who comes to most of our games now. I was friends with Mike growing up, because our moms played in a woman’s softball league together.

“When I got approved as head coach (at West Essex) in the Fall of 2004, I asked Mike to coach with me. He couldn’t so I asked Jay. I was 24, he was 22. I’ll never forget the first game we had. Mind you, we had a stud pitcher, Danielle Bertscha. but a very young team. We went to play Morris Knolls and were 10-run ruled so fast that we didn’t know what hit us. We sat down and said ‘what the heck are we doing’?

“We needed to figure it out. We had a parent on the team, Mr. Disanti, who was probably the best guy we’ve ever met and his daughter (Jackie) was the starting shortstop. We were spoiled with him because not every parent is like that. He was so helpful and supportive. Every step of the way, Jay and I made decisions together. But my name is always in the paper, and my name is always the one getting the credit, but every win and loss we had was together, so all of the success we had, was not to my credit only. We’ve made incredible friendships along the way with past and former players, and I can honestly say Jay is the brother I never had.” (Mondo is the oldest of three girls).

West Essex celebrated its second ECT title under Mondadori, and fourth overall, in 2016 at Ivy Hill Park. Jay stands back row, center, in this photo. (Click on photo for larger image)

As the years progressed, Jay and Andrea’s lives made a natural change.

“A few years ago my husband (Mike) and I wanted to start a family,’ Andrea said. “And I never knew what the timing had in store, so if Jay ever had to take over, he would have to coach third base. After Bridget Betley hit about 12 foul balls ripped down the left field side, I knew my days were numbered over there. So, we made the switch. (Andrea and Mike welcomed their first son, Colt, in September of 2016).

“But we have the perfect arrangement in the way we run this program. We have so many responsibilities that we each do. I can’t even imagine being a head coach and not having someone like that. I give all the credit in the world to the people who do it all themselves. Jay calls the pitches, coaches third base and breaks down scouting.

“But the people who have gone through the program know what Jay is all about. He is the most genuine, caring person I’ve ever met and if I could do it all over again, I wouldn’t change a single thing.”

Nice words from a head coach who will forever cherish a great friendship.