The reaction on social media was swift and somewhat repetitive.

Joe D’Ambola’s passing has indeed left a void for his family, as well as many friends, including a host of former Belleville High football players, who revered the man who loved all his kids, and realized that gruff exterior was nothing more than the hope of seeing those guys go on to productive lives.

D’Ambola ran the defense for some tremendous Belleville High football teams. When Belleville won perhaps the greatest sporting event I ever covered, the 3-2 win over Passaic on Oct. 2, 1982, head coach John Senesky was quick to credit D’Ambola’s work with the special teams, which set up the clutch field goal early in that game.

Senesky and D’Ambola were the ultimate frick and frack. Senesky would be the calm, laid back guy, who barely raised his voice. D’Ambola was the perfect complement, a highly charged man, who loved to stir the pot. 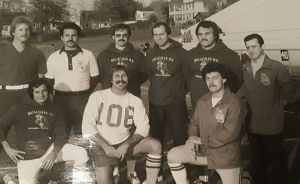 Some great times with Belleville High football coaches, and William ‘Doc’ Ellis (back row, far right), circa 1978. (Click on photos for larger image)

Just ask Chet Parlavecchio, who loved telling the story of the 1977 game between Chet’s Seton Hall Prep team and a young Belleville squad. Seton Hall had a legendary team that year while the Bellboys were just starting to learn Senesky’s system.

Before the kickoff, D’Ambola informed the officials that one of Seton Hall’s players, Joe Aulisi, wasn’t wearing the required hip padding. The official concurred and hit Seton Hall Prep with a 15-yard penalty, before the opening kickoff.

“We went nuts,” recalled Parlavecchio, who was a senior on that Seton Hall Prep team and would go on to an outstanding career as a linebacker at Penn State, before playing in the NFL. “We’re all yelling across the field at Joe, he’s yelling back. It was great.” 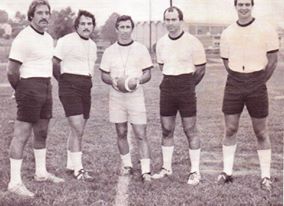 John Senesky (second from right) and Joe D’Ambola, second from left, in this 1976 photo, along with then-head coach Tom Testa (center).

Seton Hall used that anger to put a 63-0 walloping on Belleville that day. Two years later, Seton Hall Prep came back to Belleville and this time, the Bucs would win, 14-13.

“That was the type of kid that played at Belleville back then,” said Parlavecchio, himself a highly successful high school coach today. “Those kids were tough, and coaches like Joe D’Ambola and John Senesky, were the reason why.”

When Parlavecchio was informed that D’Ambola had passed away, the wistful coach was quick to laud a competitive and well-loved coach.

“What a good man,” said Parlavecchio.

Chet’s sentiment about Joe was pretty conclusive. A really good man, as well as a second father to many kids. He was also as good a friend as there ever was, with a big heart.

“A good coach, and a great man,” said Ron Charles.

“That hit like a ton of bricks,” said Perry Mayers, upon learning of Joe’s passing. “What a great guy and coach…I know he impacted a lot of his players lives…mine included.” 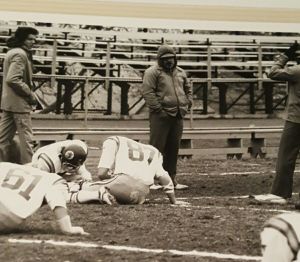 D’Ambola (center) watches players warm up prior to 1978 season finale at Kearny, on Thanksgiving. That’s me, far left. (Thanks Perry Mayers for supplying this picture).

“So sorry to hear this,” said Ted Hahula. “A great guy and friend. We worked many years together.”

“Sorry to here this news,” said Chris Chiaromonte. “A great man and a terrific family. Prayers are with the D’Ambolas.” 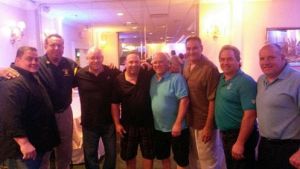 Getting together with Joe (light blue shirt, middle of picture) back in 2014, at the Chandelier.

“Prayers to his family,” said former player Frank Kokos. “I’ll tell you the truth, when I played I didn’t like him, he was a tough coach, got on you a lot, but years later you realized it was to make you better.

“A couple of years ago, at the dinner they had for Coach Senesky, Joe and I sat together and had a lot of fun talking about the old times. I saw a part of him I never saw before. He’ll be missed.”

“Joe D’Ambola asked me at graduation, what are you going to do after graduation?” recalled Luke Silletti. “I replied I have no idea. He then said ‘Luke, you’re going to wake up one day, 40 years old with kids, and wonder where the time went.’ I never forgot this.

“(When I was a kid) I said to myself, I have the meanest teacher at BHS. I couldn’t have been more wrong. Joe changed students lives,  including mine.”

“Heartbreaking news,” said Rocco Balsamo. “Joe was a great man, and coach for many of us. He was one of the best and he will be sorely missed.”

“Terrible news,” said Carl Corino. “I feel real bad. Joe was a Belleville guy, in and out. He was a good friend, coach, teacher and family man. We busted him for his grumpiness at times , but when he laughed, it was great. Joe and (the late George Zanfini) where oil and water, but the stories and the laughs were great.”

“Joe was top shelf in my book,” said Anthony Gammaro. “He was always up front, kept us all on the straight and narrow path. What a great guy.”

“Oh man, very sad news,” said James Mickey. “I have great memories of this guy for many many years, from when I was a little kid, until  playing bocce not too long ago. Great, great guy.”
Perhaps it was Nancy McDonald, a Belleville High alum (and a classmate of mine) who said it best.

“Joe is part of some of my finest memories in high school,” said McDonald. “He was a great man, with a heart of gold. RIP.”

Through that Andy Sipowicz-like exterior, there was indeed a heart of gold. Joe loved his children, was devoted to his wife, Patricia, and was a steadying influence to so many

My life is better for having known Joe D’Ambola.

He was a man’s-man, a no-nonsense, hard-working guy who would do anything for others.

I will miss him, tremendously.

Until we meet again.

4 comments on “Joe D’Ambola: A Great Man, with a Heart of Gold; A Belleville legend who reached so many in the Township”