Reflection has been deep and somewhat painful for those who cared sincerely about the late Anthony LaRezza. We’ve heard from many former players and coaches, as well as life-long friends and appreciative acquaintances, on the lasting impression the Immaculate Heart Academy softball coach left.

The latest to speak on his sudden passing and lasting legacy are perhaps LaRezza’s biggest coaching rival, Joe Leicht, the head softball coach at Indian Hills and Ashley LaGuardia, a phenomenal pitcher at DePaul High School, who is now a sophomore pitcher at Princeton University.

Let’s start with LaGuardia. An incredibly intelligent young woman, a Valedictorian of her high school class who is now excelling academically and athletically at Princeton, LaGuardia had always shared a good friendship with LaRezza, even though she was usually competing against his teams.

Ashley was informed of her friend’s death on Feb. 4, by her father, John, and needless to say, the news hit hard.

She was able to put some words together tonight, remembering some great times.

(As an aside, having gotten to know Ashley’s family over the last past year, any time I’d tell Anthony that I was having dinner at the LaGuardia house, Anthony would always ask about Ashley, and for that matter, her entire family.)

Ashley recalled a wonderful man in LaRezza, who was sincerely committed to her future success.

“Although I never had the opportunity to play for him, LaRezza felt like he was one of my coaches,” said Ashley. “Whether it was playing IHA, or growing up through the years playing against Pride, I could always count on a good competitive game, followed by jocularity from him. 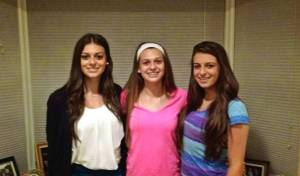 Ashley LaGuardia (far right) with her sisters Alyssa (left) and Amanda, counted LaRezza as a good friend and mentor.

“He had a way with players and the sport of softball, that will make him a legend in the softball community. It was like I was one of his own players, and to this day I have the utmost respect for him.

“It was one of the hardest things I’ve had to do with my kids, telling Ash about Anthony,” John said. “But I didn’t want her to hear it from someone else.

“Anthony was an incredible guy. IHA and DePaul had some great games, but in the end, Anthony was all about the kids, in general. He wanted to win as much as anyone, but he cared about all of them. He was a huge influence in my daughter’s life, and for that matter, a good friend to my family.”

Joe Leicht has put together a Hall of Fame high school coaching career. At Wayne Valley, he passed the 500 win mark earlier this season, as that school’s boys basketball coach. In the spring, Leicht coaches the Indian Hills softball team. In 2014, he guided that program to a state-best 34-0 record. He is closing in on 500 wins as a softball coach, too, and could hit that plateau in the next few years, making him a rare 1,000 victory coach.

Indian Hills softball coach Joe Leicht was joined by his 2014 undefeated squad, after a Wayne Valley basketball game in early 2015. Leicht and LaRezza shared a great rivalry and good friendship.

If you know Bergen County softball, then you understand the rivalry between Indian Hills and IHA is potent, to say the least.

In the 2014 Bergen County championship game, IHA and Indian Hills met, in a battle of unbeatens. IHA led, 4-3, before Hills won it on a dramatic two-run, walk-off homer, in the bottom of the seventh inning.

LaRezza would often say afterward that Leicht made it a point of reaching out to LaRezza to congratulate him on a great game, before joining his team in a crazy celebration.

“If he was celebrating with his kids after that kind of game, that would be have been fine with me,” LaRezza said back then. “But Joe took a minute to come over, in the euphoria of a great moment for them, to say something to me. That’s not only a great coach, but a classy guy, too.”

Leicht was coaching a basketball game today, but took a few minutes before the tip off, to remember LaRezza.

“It’s just so hard to believe,” Leicht said. “Anthony wanted to win as much as anyone, but the way he went about his business was something you had to see. I always said for a Non-Public coach, he had a conscious. He was all about the kids, whether it was his team, or any team he’d play. There are so many kids on my team that thought the world of him.

“When I won my 400th career game at Indian Hills (in 2014), he and his team sent over a card congratulating me. Who does that? He was really special. I’ll miss him.”

Anthony LaRezza will be waked at Biondi Funeral Home, in Nutley, on Feb. 8, from 2-8 p.m. The Funeral Mass will be on Feb. 9, at 10:30 a.m., with internment to follow at Glendale Cemetery, in Bloomfield.