Carly Anderson’s incredible athletic career at Nutley High was concluded in the Group 3 semifinals, when her Raiders dropped a 5-2 decision to Sparta on June 3, at Caldwell University.

The senior (aka Spectacular Bid) who will play softball at Rowan University this fall, will leave a winning legacy for the Maroon and White, according to her coach, Luann Zullo.

Lucky No. 13, Carly Anderson was a stud for the Raiders.

“Carly is such a tremendous athlete,” said Zullo. “This year, more than ever, she became a true competitor. At the plate, in the circle, or in the field, she was outstanding. She rose to the occasion this season, and made us a tremendous team.”

Nutley finished 24-8 this year and won its first sectional championship in five years. During the winter, the Raiders girls’ basketball team also won a state sectional title and Anderson was a key contributor there, as well.

Nutley’s leadoff batter was as dangerous as they came at the plate and her pitching was superb.

“Last year, Carly battled some injuries, which limited her pitching, but she came back and was dominant in the circle this year,” said Zullo.

If you haven’t already done so, add Carly Anderson to the list.

Her ‘Spectacular Bid’ to lead Nutley to a championship should never be forgotten.

Thanks, Carly, for four wonderful years. 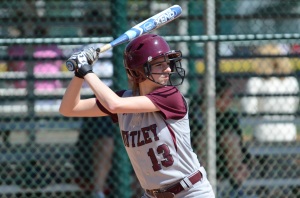