The 38th Essex County Tournament should feature an excellent championship game on May 25, as the top two seeds meet at Ivy Hill Park.

Top-seeded Mount St. Dominic, the defending champion, will take on the second seed, West Essex, at 6 p.m. Both teams won exciting semifinals last week, as West Essex edged Nutley, 1-0, thanks to a classic slide at home by Monica Onorata in the bottom of the sixth, while Mount St. Dominic defeated Livingston, 5-1, in a well-played game.

The pitching should be tremendous, as West Essex’s Sami Huetter (Canonero II) and Kelsey Oh of Mount St. Dominic have to be considered the top two hurlers in Essex County. Most will also counter that Oh is the best high school pitcher in the state, or among the top three, for sure. And what makes this matchup so intriguing is that both pitchers are sophomores, and the nucleus of West Essex and Mount St. Dominic consists of underclassmen, meaning a potentially great rivalry is brewing here.

Mount St. Dominic has had the better of this rivalry, lately. The Lions have beaten the Knights twice this year and haven’t lost to West Essex since 2012. But a tremendous game earlier this season at West Essex, which MSD won, 1-0, in extra innings, may give a good indication of an intense rivalry brewing. Huetter and Oh hadn’t faced each other until that game in April and it was everything expected of a classic horse race.

This is the second time the schools will meet for the ECT championship. Eight years ago, West Essex prevailed, 2-0, in the final. The Knights last appeared in the county final in 2010, when it lost to Cedar Grove, 2-0. Mount St. Dominic is seeking its sixth county title, which would put it second, all time, in ECT history, trailing only Caldwell’s 10 crowns. This is also the eighth time in the last nine seasons that MSDA will play for a championship. The Lions are 3-4 in title games during that span, and a win will mark the second time the program has repeated as champs.

Not surprisingly, Montclair coach Phil Delgado was at last Sunday’s ECT semifinals at Ivy Hill. The guy lives for softball and the first-year coach for the Mounties couldn’t be happier that he’s coaching in Essex County.

“This is home, this is where I want to be,” said Delgado. “I’m living the dream. I just love what I do. Coaching these kids is great.”

Delgado’s enthusiasm speaks for itself. He could easily have complained that competing in the SEC’s American Division wasn’t in his team’s best interest in 2015, but he’ll hear none of it. Instead, he embraced the challenge his team has faced, playing the likes of Mount St. Dominic, Livingston, Nutley and West Essex twice.

His respect for opposing coaches is also infectious.

“The guy is incredible,” said Delgado of Daily. “Look what he does, year in, and year out. He’s had great players, but that doesn’t always mean you’re going to win, either. And look at this year. He guides a young team to the county semifinals, when I don’t think many expected him to get this far. I’ve learned a lot from him over the years. Jason’s a tremendous coach.”

In the off-season, Delgado coaches and trains a number of the kids who play in Essex County, and it’s clear the respect those players have for him.

Montclair has had its share of coaching changes. Since 2009, Delgado is the fourth different head coach, which can’t help a program’s stability. The stronger programs in Essex, such as West Essex, Bloomfield, Livingston and Mount St. Dominic have enjoyed the comfort of a head coach who averages 15 years on the job, maybe longer.

Let’s hope Delgado is the long-term answer for the Mounties.

The Bergen County Tournament will certainly test a team’s mettle. The semifinals will feature two tremendous games, as Immaculate Heart takes on Indian Hills, at 11 a.m. and Demarest faces Northern Highlands at 1 p.m. Both games will be played at Indian Hills, in Oakland, on Saturday, May 23. Last Sunday’s quarterfinals were riveting, according to IHA coach Anthony LaRezza.

“All four games came down to basically the final pitch,” said LaRezza. “Great pitching and timely hitting by all eight teams in the quarters. The intensity in each game was good to see. We’ll have a huge test against a tremendous Indian Hills team on Saturday.”

Fans will recall that IHA and Indian Hills met in a classic championship game last season, with Hills winning on a walk-off homer in the bottom of the seventh inning.

LaRezza has the highest regard for Indian Hills’ Joe Leicht, and it’s pretty obvious the feeling is mutual. After Hills’ victory in last year’s title game, Leicht made it a point of reaching out to LaRezza before taking part in any kind of celebration. You have to think with the quality of softball in Bergen County, all of the Final Four teams will be favorites to win, or advance to a final, in its respective state section. 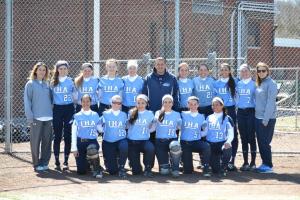 Could be a couple of studs in this photo ! (Courtesy of IHA softball)

As far as IHA, the Eagles lost back-to-back games a few weeks ago, and have been on quite a run, since. LaRezza had said at the outset of the season he wasn’t sure how good this year’s team could be, but at this point, you have to think they’re a favorite to be in the running for a county and possible state crown.

As a mater of fact, Indian Hills and Northern Highlands could meet in a sectional semifinal, as well as a county championship game, with wins in their respective games. And don’t discount Demarest, who is also in the same section as Highlands and Hills. Demarest faces Hills in a sectional quarterfinal on May 20 and could face them again in a county championship game.

Crazy, for sure, and some great games for fans to enjoy.

5 comments on “ECT Final should be an excellent matchup; Montclair’s Delgado ‘Living the Dream’ (And he really is); Bergen Tourney shaping up as a classic”