I’ve covered more than my share of sporting events since I began writing for a newspaper back in 1975. I’ve often said the reason why I still enjoy going to games and matches is the rapport built with the athletes, and the relationships developed with the coaches.

I’ve also been doing this long enough that a number of athletes that I covered as ‘kids’ are now coaches themselves. That either means I’m getting older (aren’t we all?) or that time does fly by (which goes hand-in-hand with getting older, I guess).

Anyway, with all that said, I’ve always had a special affinity for the wrestling season. It is, by far, the longest season in high school sports. Practices generally last 3 to 4 hours a day, there’s a high rate of injury and for a coach, it takes a special man to keep athletes motivated, especially as the season hits early February.

Last weekend, I covered the District 13 and 14 championships. I saw Nutley repeat as champion for the third straight year at District 14 while Caldwell won the District 13 crown in a close battle with Passaic Valley.

As a Belleville guy, I still despise when Nutley wins at anything, but that’s just because it’s in the blood. I’ve always said I’ll never wear anything with a Nutley Raider logo, but as a grown man, I’ve come to respect good kids and quality coaches, and this Nutley team has both.

From the coaching perspective, I am a big fan of Nutley’s head guy, Frank DiPiano. He does it right, plain and simple, and there’s a reason why Nutley, which had never won an Essex County title since the inception of the ECT in 1974 had won back-to-back titles in 2012 and 2013 and now have the three-peat at the districts.

Frank comes from a legendary coaching family, led by his father, Michael Sr. The DiPiano coaching tree also includes older brother, Mike Jr., who did a great job for the Nutley girls’ soccer program this past fall as its second-year head coach and is in his third season at Northern Valley, Demarest as that school’s wrestling coach. Middle sister, Michele is an accomplished high school softball coach, as well as a successful elementary school teacher.

The biggest compliment I can ever give Frank is that I’d trust him coaching, or teaching a child of mine any day of the week, and twice on Sunday.

That same sentiment goes for Passaic Valley wrestling coach Joe Benvenuti. I first knew of Joe when he was a student-athlete at Passaic Valley High School. I later covered his wrestling teams at West Essex and now have seen him continue a winning wrestling tradition at P.V.

‘Joey Ben’ only knows one speed, and that’s full throttle. But as intense as the practices are in the Hornets wrestling room, there’s a compassionate side of this man who wants his athletes to succeed to their fullest potential. And not because it will improve his won-loss record, but the firm belief that wrestling can develop a young man’s character and lead him to success long after his final high school match.

While still a young man himself, Benvenuti has been coaching long enough now that some of his former wrestlers have joined his staff. He also takes pride in coaching against former wrestlers, because he is proud to see those young coaches giving back to the next generation of wrestlers.

I’ve also seen Joe become a doting father and loving husband. He epitomizes what it means to be a man. 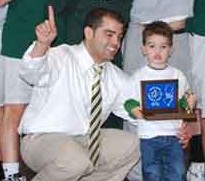 One of my all time favorite wrestling coaches is Caldwell’s Gary Garamella. Gary has been Caldwell’s head coach for about 15 years now. A teacher at Caldwell High, where the school’s moniker is ‘Chiefs’, Gary is literally, the ‘Chief’, since he also holds the top position in the town’s all-volunteer Fire Department.

There is never a time when the words class and professionalism haven’t reigned on this man.

I’ve often said that Garamella’s entire coaching staff looks like they’re headed to an IBM board meeting, as opposed to a wrestling match. But dressing the part goes a long way in sending the message that a Caldwell wrestler will work hard in practice and conduct himself like a man on, and off the mat.

Despite losing one of its best wrestlers to a serious leg injury at the Essex County championships last month, Garamella led the Chiefs to the District 13 title, defeating Benvenuti’s Passaic Valley team by 10 points. He was also named the District 13 Coach of the Year.

Trust me, there are many more men like Frank, Joe and Gary, but I wanted to express my appreciation to them for making the reporter-coach relationship so beneficial all these years, and hopefully that will remain for many years to come. They aren’t in this job for the money, they’re in it for all the correct reasons.

Caldwell’s Gary Garamella, a Chief on and off the wrestling mat.